Ford and Carroll Shelby joined their forces one more time to create the most powerful Mustang to date: the GT500.

Carroll Shelby and Ford didn't join their forces from the beginning. Their connection started after the legendary driver took an AC chassis and dropped a 221 ci engine in it. Later on, Ford asked Shelby to built them a winning car for LeMans, and he did. The rest is history, and the Shelby snake badge was placed only on high-performance vehicles.

The GT500 featured a more aggressive look with the silver snake badge on the black front grille. To make room for the supercharged V8 engine, the car featured a wide dome on the hood with three extracting vents on it, needed for cooling. A special aerodynamic package with a lower lip spoiler, side sills, and a duck-tail on the trunk lid completed the image.

To keep its occupants fixed, Ford Mustang Shelby GT500 featured a pair of bucket seats for the front passengers. The dashboard featured a new infotainment unit on the center stack, while for the instrument cluster, there was a complete package with six analog dials. 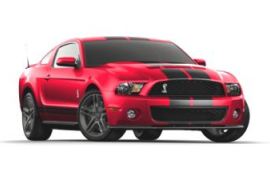