Ford introduced the original Mustang GT350 Shelby in 1965 together with the legendary Carroll Shelby and the first car with the Cobra name on its engine.

Introduced in late 1964, Ford Mustang quickly found its way on the market and launched the pony-car era. While small engines powered the base versions, the 1965 Mustang GT350 came to fix that and offered a NASCAR vehicle for road use.

The car featured a lighter hood made out of fiberglass instead of pressed steel, and even if the two-stripe design was very common, it was a dealer option, not from the factory. Even though the Mustang was available in three body versions, the GT350 was produced only as a fastback. It still featured the same front design, but with a few enhancements. Its horse-badge was installed on the left side, and it was smaller than the chromed badge with a mustang in the middle of the radiator's grille. On the front fenders, there was a small GT 350 badge.

Inside, a pair of race-bucket seats were fitted for the front occupants, and there were no rear seats. Instead of those, there was a fiberglass shelf for the spare wheel. The dashboard featured an additional pod that hosted an oil-pressure dial and a tachometer with a read-line at 6.500 rpm.

Ford Mustang GT350 Shelby featured a 4.7-liter (289 ci) with a four-barrel carburetor that sent the power to the rear wheels via a 4-speed manual. Despite its simple suspension system, the Mustang GT350 Shelby was a very efficient track-car with front independent type and a live rear axle. Ford offered it even with a special competition package. 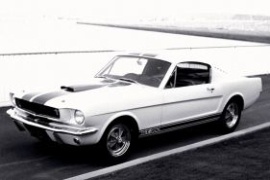 1 Deployed With a Marine: 1967 Ford Mustang Misses Chance to Be Restored, Stored in a Barn

3 Ford Follows VW and Will Not Sell EVs After Leasing Ends: It Needs the Batteries