The Mustang is one of the best-known vehicles from the blue-oval brand.

In 2014, the sixth generation of the original pony-car was launched and it was the first Mustang to be sold worldwide.

The history of the Mustang goes back to '60s when John Oros, a designer who's parents emigrated from Transilvania (Romania) draw the concept and won the internal design challenge with his team. In 1964 the first final model rolled out the factory and started its life as the 1964 ½ model. The rest was history.

Mr. Oros passed away in 2012, but his design concept lived on in the 2014 model, with the retro-design look of the vehicle. The initial idea was to draw "a car that the ladies would love that the men would love just as much". The long hood, sloped cabin, and aggressive look were the strong points in the car's design.

The fastback version of the original Mustang was the favorite for car-enthusiasts. The 2014 coupe was available only as a convertible and a fastback-coupe. The long, sloped roof was ended into a small rear spoiler. It was the original pony-tail that was kept and used. The three angled lights featured on the 1964 Mustang found their way on the DRL upfront inside the headlights and on the rear taillights.

The interior had the classic look with modern necessities. When compared with the convertible version, the coupe offered more legroom for the rear passengers, but less headroom. Ford installed all of its new features for the Mustang, including its SYNC3 infotainment system. 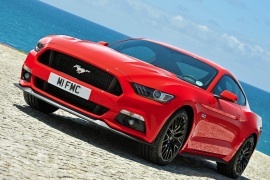