The Mustang's third-generation covered a wider area, but it was split into a few updates along the road.

In 1981 Ford introduced a turbo version.

After a few oil crises, the customers were concerned only when a crisis started, while the big companies began to be worried all the time. Ford tried to offer both performance and fuel-efficiency in the same package.

The Fox-body Mustang was a love and hate affair for the American carmaker. The former glory now was struggled to keep pace with regular vehicles. But, at least, it looked like it was able to score a ten-second on a quarter-mile run. It's four, squared headlights next to the raked grille, and the angular look of the greenhouse made a good impression when the Mustang was introduced. While the front was still attractive, the back of the car lost its appeal and featured bland-looking taillights.

Inside, it was no different from most compact-sized vehicles on the market, with a squared look for the instrument cluster and in-dash, buried, dials. The interior styling was influenced by European trends but applied half-way.

The Mustang's biggest news was the introduction of a turbocharger applied on the base, a 2.3-liter engine. It was a big improvement since it offered a maximum output of 131 hp. At the same time, a 5.0-liter V8 produced a mere 140 hp. 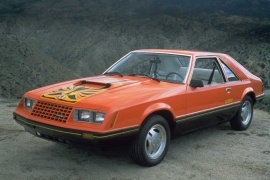