While it was still part of the Mustang's first generation, the 1972 Coupe looked different, in a more GT-style look.

In the late '60s, the Muscle-car era was at its heights, and other carmakers offered cars that could outrun the Mustang. It was time for something bigger and powerful, but the original '65 vehicle couldn't handle larger engines. After several modifications, the 1972 Coupe was introduced in 1971 with a wider body to accommodate the 7.0-liter engine (429 ci). Unfortunately, Ford axed that engine for the 1972 model.

The design team tried to follow the original fastback design, with a wave-like beltline. Due to cost-cutting reasons, the side sculptured panels were simpler than before, ruining the original effect. Another cost-cutting measure was the vertical rear window, placed between longer body panels, which mimicked the wide B-pillars from its predecessor.

Due to the larger body, the interior was wider. The instrument cluster was far from the original design and showed a more conservative look with round dials, and some versions didn't even feature a tachometer. It was clearly a car built to compete on the GT segment but wearing the Mustang badge on it.

In 1972, Mustang lost the big-block engine and remained with the 5.8-liter unit as its most powerful version. In the top-spec version, it was still fast, but not the beast it used to be. 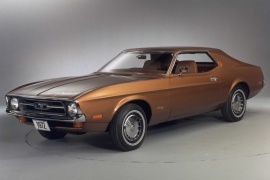