The Mustang got bigger in for the 1971 model, and the carmaker literature appealed to the customers' memory for the original 1964 model, which was sold in huge numbers.

Ford considered that the original customers were now six or seven years older, and they already had kids and needed a place to seat them. While the original Mustang had a minimal room in the back, the 1971 model offered enough for teenagers. Unfortunately, the '71 Mustang didn't live too long. New emission and insurance regulations and CAFE agreements put an end to the muscle car era, and the original pony-car was no longer a pony.

Its long hood and sloped roofline ended with an almost flat windscreen left a sports car's impression. Ford even said that the design was inspired by European sports cars. The spoiler under the front bumper, the flush door handles, and the wing on the trunk somehow confirmed those statements. But the size and the car's weight were on the other end of the scale.

Inside, Ford installed high bucket front seats with integrated headrests. They could tilt and slide forward to make room for rear passengers. The dashboard was rear raked and slightly curved. In front of the driver, the carmaker installed the essential dials that showed the speed, the fuel level, and a big clock. Surprisingly, there was no tachometer for that sports car.

Under the hood, Ford offered the Mustang a choice of two engines paired either with a four-speed manual or a four-speed automatic. But customers went on buying smaller cars. As Lee Iacocca said, "The Mustang market never left us; we left it." 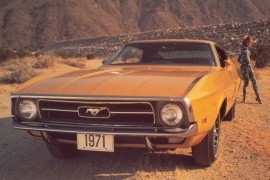