Once again, Ford increased its pony-car's size, the Mustang, and offered new drivetrains that helped the car keep-up with the Dodge Challenger and Chevrolet Camaro.

The glorious era of muscle-car was at its heights, and behind all the marketing strategies, everything was down to the midnight races and the quarter-mile time. All the carmakers knew that a powerful vehicle would sell better than another, and the image of a "daytime cruiser and night-time racer" was the one that sold more than anything else, especially in the coupe-segment.

Ford designers imagined a new front fascia that featured two additional headlamps included in the grille's outer sided. Suddenly, the Mustang had a night-time signature image, apart from the running horse badge. The fastback version sported two air-intakes on the rear quarter panels and made the car looks meaner. And, above them all, stood the Boss 429 version with an advertised 375 hp engine.

Inside, the dashboard was heavily modified and sported a four-dials instrument cluster. The dashboard was still looking like two separated parts, bonded together via a center stack. Its sport-bucket seats at the front were standard, and the rear bench was straightforward to remove.

For the drivetrain, Ford installed a choice of three engines, plus the special versions such as Mach 1, Boss 302, and Boss 429. The latter featured a Nascar engine, and it was a street-legal drag racer. 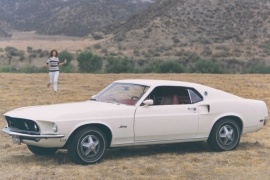