Despite not being the best-sold vehicle nor the fastest Ford, the Mustang might be the most iconic car ever built by the American carmaker.

The original Mustang came on the market in 1964, and it was the original pony-car, hands down. It was born as a project for a personal luxury coupe in the project "Allegro." The Mustang name came after one of the designers, Philip T. Clark, saw wild mustangs in Nevada. He designed the logo and presented it to Lee Iaccoca, who embraced the name and the idea to have a specific badge on the car.

Lee Iaccoca imagined the Mustang as a personal vehicle. It featured two round headlights and a pushed-out grille. Thanks to its long hood, the 2+2 cabin, and the short deck, the Mustang fired-up people's imagination. The carmaker installed a set of air-intakes in front of the rear wheels to cool the drum-brakes. In the back, designers placed three vertical taillights, which eventually became notorious.

Inside, there were two bucket seats and a four-on-the-floor gear-stick. The instrument cluster resembled the front fascia, with two round dials on the outer sides and a linear speedometer between them, and three lamps at the bottom. Since it was a three-box design with a regular shape for the greenhouse, there was an adequate headroom for two passengers.

Under the hood, Ford installed a choice of engines starting with an inline-six that provided just 100 hp, and it was paired to a 3-speed manual gearbox. Later on, after media and customers praised the car, the American carmaker introduced another two V8 engines. 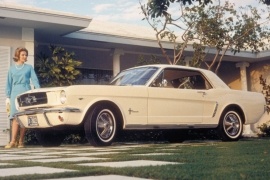