1 Ford Returns to F1 After Almost 20 Years, Has 40 Years Worth of Victories To Back It Up

2 New Ford Ranger Raptor Arrives in Mexico, the U.S. Market Will Get It for MY24

Ford developed the Ka in a joint-project alongside the Italian car-maker Fiat. But the result was far from what was expected.

The Ka was built in Poland at Fiat's factory on the same assembly line with the 500, Panda, and the Lancia Ypsilon. In October 2008, at the Paris Motor Show, Ford introduced it while the world financial crisis was shaking the automotive industry. Ford needed a car that could sell in big numbers to compensate for other blue-oval brands' financial loss. It was kept on the market for almost eight years, but it was discontinued afterward on the European continent.

The design was a blend of curved lines combined in angles that made the car looks bigger. The hood was short, and the greenhouse was tall to make room for four adults. It was hard to hide that the vehicle had less than 12 ft (3.6 m) long. The three-door hatchback was fit for crowded cities, and the tall bumpers were designed to reduce the repair costs due to light parking scratches.

The Ford designers installed a two-tone dashboard to improve the car's appeal in front of the customers. With its friendly dashboard and high-mounted gear stick, Ford addressed the car to those who needed a car for the urban commute. In the back, there was hardly room for three adults. The rear bench seatback was folding to expand the, otherwise, small trunk.

While Fiat installed its 1.4-liter gasoline unit, Ford kept the 1.2-liter version and took the Italian company's 1.3-liter turbodiesel engine. The Ka was offered exclusively with a 5-speed manual gearbox. 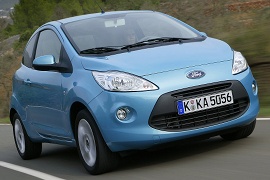