The MPV market was still significant at the beginning of the '2000s, and Ford tried to get more from it by introducing the C-Max in 2003.

Ford managed to build a broader range of vehicles based on its C1 platform, which was used for the second generation of the Focus. The C-Max appeared as an important contender for the Renault Scenic and Citroen Picasso. Unlike its rivals, it relied on the rear independent suspension that made it more comfortable.

From the outside, its front fascia was unmistakably related to the Focus. It featured similar triangular, curved headlights and a similar-looking grille. From its sides, it resembled a Focus station wagon with a higher greenhouse and door panels. In the rear, it sported a set of taillights mounted high on the D-pillars.

Inside, the C-Max offered a roomy interior for five adult passengers. Despite sharing the same wheelbase with the Focus, it allowed better legroom for the rear seat passengers since its seats were higher. To make the car feels more like a compact hatchback, Ford installed a higher center console with a shorter gear-stick.

Under the hood, the carmaker installed a choice of four gasoline and diesel engines, paired as standard to a manual gearbox. For selected versions, Ford offered an automatic transmission as well. 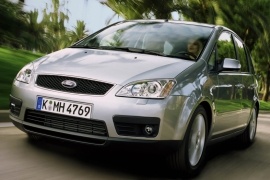 3 Ford Recalls About 63,000 Broncos and Rangers Over Windshield That May Detach

4 Deployed With a Marine: 1967 Ford Mustang Misses Chance to Be Restored, Stored in a Barn