2 Ford Mustang GT Drags Opel Vectra B, Even the V8 Feels Outside of Its Element

With the second generation of the Focus released in 2004, Ford had enough time to notice and improve the less good parts that came with the previous model.

Having the same basic structure, handling, comfort and safety remained the same, and by no means they needed improvement as the second generation sold really well mostly because of these.

However, the exterior design needed to be refreshed to bring the Focus up to date, as well as the interior getting updated with higher quality materials, a modern design and a better insulated cabin. The updates included a revised center stack, redesigned windows, redesigned mirrors switches, high quality leather for specific trim levels and for the Ghia and the Titanium models, Ford added a new woven headliner as standard.

Some of the optional features coming with the 2004 model became standard, such as the electronic stability control that came with every Ford Focus regardless of the trim level.

Technology was one of the main points Ford focused on improving, with the driver being able to connect and portable audio device via either a 3.5mm jack or a new USB port. 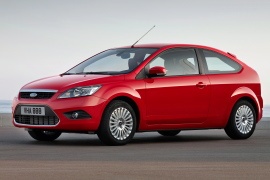