2 Ford Returns to F1 After Almost 20 Years, Has 40 Years Worth of Victories To Back It Up

3 New Ford Ranger Raptor Arrives in Mexico, the U.S. Market Will Get It for MY24

Compared to the previous generation Fiesta, the exterior design was a huge change, expressing agility and attitude. The agile look was given by the big grille on the lower part of the bumper that incorporated the license plate bracket. The sweeping roofline ended into a small spoiler, while the very angled A-pillar added to the dynamic look.

Both the 3-door and the 5-door versions were based on the same body, thus the 5-door didn’t feature a less sporty or dynamic design.

Compared to the 3-door version, the Fiesta 5-doors came with a bigger glass area that created a roomier feel inside the cabin.

Inside, the Fiesta 5-doors featured a roomy cabin for the front occupants, while rear passengers were not the happiest with the limited headroom and legroom.

The interior was pretty modern for 2008 and depending on the trim level, it featured automatic climate control, heated power side mirror and an automatic gearbox.

Both gasoline and turbo-diesel engines were available and could be paired with a 5-speed or a 6-speed standard manual transmission depending on the powerplant fitted. 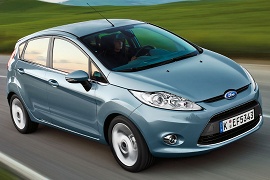