Ford introduced the twelfth generation of the F-150 pickup in 2008 as a 2009 model-year in 35 versions, and the SuperCrew was the most family-oriented of them all.

Despite the plunging economy during the world financial crisis, Ford pushed harder and launched a completely new model of its best-selling product, the F-150. While the SingleCab was the plain work truck, the SuperCrew was at the other end of the scale. At the front, it shared the same front fascia as the rest of the range, sporting either a three-slat chromed grille or a more stylish one with a mesh design, depending on the trim level. Its L-shaped headlights and the low-mounted fog lights in the bumper provided the much-needed road illumination during night driving. From its sides, the customers could choose between the black, unpainted door handles and mirrors or the body-colored ones for the upper trim levels.

Ford traded some loading space for cabin space. Thus, it could provide more legroom for the rear-seat passengers. Moreover, the rear bench could slide and flips up out of the way, leaving a 57.6 cu-ft (1,631 liters of space). That’s more than most of the compact-sized station wagons on the market from those years. A complete instrument cluster fitted with two large dials and four small gauges provided the necessary information for the driver. In addition, an LCD sat between the speedometer and tachometer, showing more data from the onboard computer.

Under the skin, the F-150 SuperCrew featured the same hydroformed chassis that impressed the IIHS inspectors when they crash-tested the pickup. Under the hood, Ford installed only V8 engines paired with a standard six-speed automatic gearbox. 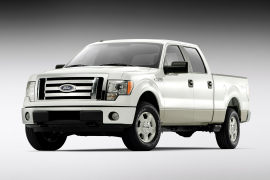