The F150 reached its tenth generation in 1997, but the blue-oval brand's marketing department found a niche on the market and introduced a longer version in 2001: the Super Crew.

By 2001, Ford F-Series was already the most produced nameplate in the world. After millions of units produced and different evolution in its lineup, Ford F-150 came on the market with a new approach, which allowed it to offer roomier interiors and still carry heavy loads, not to mention towing capabilities.

The 2001 F-150 didn't look as rough as some other pickups on the market. Its rounded edges and smoother design for the headlights might sound like a softening for the rugged pickup. The Super Crew version featured four full-size doors. Ford already had a four-door version, the SuperCab, but with rear-hinged rear doors. The Super Crew had regular doors. In the back, the bed was big enough for most of the loads and, if there was a need for something more, the car could tow up to 8000 lbs (3628 kg) in a 2WD version.

Since the Super Crew was designed to be as useful as a utility vehicle as a family vehicle able to tow the boat to a lake in the mountains, the interior had to be comfortable enough. There was plenty of room for five passengers. The wide cabin allowed three adults to sit in the back comfortably.

Under the hood, Ford installed some of the powerplants offered on the other versions. There were two V8 options: a 4.6-liter and a 5.4-liter unit. The Super Crew was offered as 2WD or 4WD, but only with an automatic transmission. 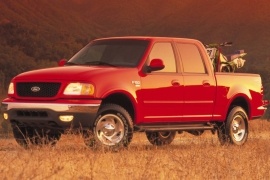