Still, the blue-oval brand's marketing department found a niche on the market and introduced an extended version for the Regular Cab version: the 2001 Super Cab.
By 2001, Ford F-Series was already the most produced nameplate in the world. After millions of units produced and different evolution in its lineup, Ford F-150 came on the market with a new approach, which allowed it to offer roomier interiors and still carry heavy loads, not to mention towing capabilities.

The 2001 F-150 didn't look as rough as some other pickups on the market. Its rounded edges and smoother design for the headlights might sound like a softening for the rugged pickup. The Super Cab version featured four doors with rear-hinged rear doors. In the back, the bed was big enough for most of the loads and, if there was a need for something more, the car could tow up to 8000 lbs (3628 kg) in a 2WD version.

The customers used the Super Cab mostly as a workhorse since it could carry two extra people in the back when needed. Other than that, that area was useful as a storage area for fishing rods or camping equipment.

Under the hood, Ford installed some of the powerplants offered on the other versions. There were two V8 options: a 4.6-liter and a 5.4-liter unit. The Super Cab was offered as 2WD or 4WD, but only with an automatic transmission. 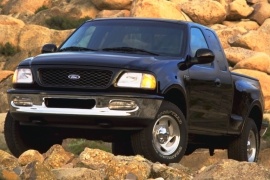