On the eleventh generation of the Ford F-150, the American carmaker introduced the SVT version, which was a fast vehicle.

But for the twelfth generation, the blue-oval brand came with a different plan.

While the F-150 SVT was much more of a drag racer, the 2009 Raptor was a different kind of animal, with impressive speed and suspension tweaks inspired by the Baja racing trucks. Despite its size, the pickup was not just fast on the asphalt; it was fast on the off-road too. Moreover, it could take a beating quite well.

With its prominent black grille where the Ford lettering was sculptured, the F-150 Raptor showed a menacing attitude. Its overfenders and the big tires fitted on beadlock-like alloy wheels were just as impressive as its high-lift suspension.

The interior could host five passengers, but obviously, the front ones could sit more comfortably. Designed by the Special Vehicle Team (SVT) for active people, the car featured bolstered bucket seats, usually not seen on pickups. The bench was fit for three in the back, although only two headrests were present. SVT used the same gauges inside the instrument panel as on the regular F-150 but enhanced them with white dials and red needles.

But while the regular Raptor was powered by a 5.4-liter V8, there was also a Raptor SVT R, which sported an even more powerful 6.2-liter powerplant that was tuned for this fast pickup. Both versions were paired to a six-speed automatic that sent the power through a two-speed transfer case to the rear wheels or in all corners. 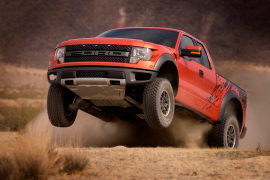