Ford U.K. and Ford Germany combined their forces under the new Ford of Europe name and jointly developed Cortina's third generation, and their efforts paid off.

Launched in 1970, the Cortina marked a turning point for the blue-oval brand in Europe. It was inspired by the Coca-Cola bottle design trendy in the U.S. and introduced new engines and technologies. It was available as a coupe, four-door sedan, and station-wagon to answer all the market's needs and, starting with 1972. It was Britain's best-selling car until 1976 when the Escort overtook it.

The boxy design of the Cortina MKII was gone, and the new look took its inspiration from the European Taunus model. Its curved lines over the front and rear fenders made the vehicle looks more muscular. While it wasn't longer than its predecessor, it featured a longer wheelbase, and it was 100 mm (4") wider. The rear windscreen was sloped more than before, and that led to a sportier look.

But it wasn't just a sportier exterior look. Inside, the carmaker installed a new dashboard and a raised area for the instrument panel. Depending on the engine size and trim level, the dials were either installed on a panel or scooped down in a binocular style. The carmaker mounted a panel on the center stack with other gauges in addition to the speedometer, tachometer, and clock. The interior room was adequate, thanks to its longer wheelbase than before.

Under the hood, Ford installed a wide range of engines, depending on the market. While the base model still featured the old 1.3-liter from its predecessor, there were a few new engines with overhead cams (OHC). Another significant improvement was on the comfort side, where the Cortina MK3 received a double-wishbone suspension. 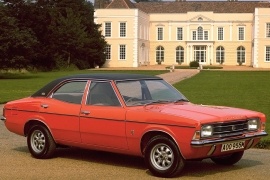