The facelift version of Ford's compact MPV was unveiled at the 2006 Bologna Motor Show and arrived at dealerships in spring 2007.

Ford dropped the Focus C-Max nameplate and replaced it with just C-Max in order to better define the car as part of the car maker's MPV lineup, dubbed Max. While the engine range remained the same as before, the C-Max suffered an updated visual makeover to bring it in line with Ford's new Kinetic Design language. Although the car wasn't developed based on the Kinetic concept, Ford applied a series of retouches both to the exterior and interior to make the car more appealing. 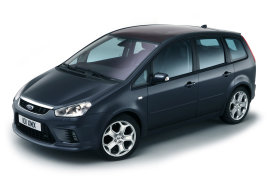