Have you seen the movie “Bullitt”? Well, if you’re not familiar with the car chase, at least now you know where the nameplate comes from.

We could say that the Bullitt was the upgraded version of the GT model, however, it was more than that. The Bullitt could easily compete with a Dodge Challenger and a Chevy Camaro. Why? Because the Bullitt was a combination between the two: a grand tourer with muscles.

The Mustang’s Bullitt could be visually differentiated from the GT and the EcoBoost versions by the exterior paint color. Customers had only two colors to choose between, green (not an ordinary green, you should see the movie!) and black. Other visual differences consisted of the 5-spoke alloy wheels, the Brembo callipers and the chromed grille.

You would not see the Mustang badge anywhere outside or inside the Bullitt, as it was replaced by the Bullitt logo (of course).

The cabin of the Bullitt was pretty much similar to the Mustang’s other versions, however, it had a cue ball shifter and an aluminum bezel. The users could opt for Recaro seats.

The 12-inch display was used to configure the car’s driving modes, to be clearer, the steering, the suspension and the exhaust sound. While the users could switch between different driving modes, they could also add a personalised one. For example, as the exhaust was pretty loud, users could choose to start the car in a quiet mode. Sure, quiet was not exactly the right words for the 5.0-liter V8 with 480 hp.

And overall, $61.000 seemed like a good price for what the Bullitt offered. 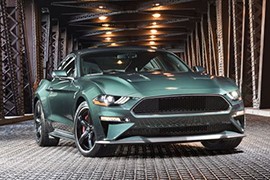 1 Ford Maverick Had a Dream, and It Was All About Tuning

2 This 1968 Ford Mustang Has Already Been Saved Once, Now It Needs to Be Saved Again

4 Westen Champlin Hates Boats, Won't Stop Him From Towing One With a Cummins-Swapped Mustang

5 Vermont's Republican Governor Now Drives an EV Made by Ford