Fiat refreshed the Tipo lineup and, along with other improvements on the drivetrain, introduced a new crossover version named Tipo Cross.

The Italian carmaker introduced the new generation of Tipo in 2015 as a successor for the Bravo and Linea models. It was built as an economy vehicle, with a low price and low maintenance costs, using a new platform. It was offered in three body versions: sedan, hatchback, and station wagon. The Tipo lineup was refreshed in 2020.

The facelifted model featured full-LED headlights and taillights on the Tipo Cross version. The manufacturer also installed brushed chrome elements in the lower section of the car. A pair of 16" light-alloy wheels was offered as standard while a 17" was on the options list. Fiat offered the Tipo Cross only as a hatchback. Together with a 4 cm (1.6") raise in the ground clearance due to the new suspension, Tipo Cross offered a more adventurous look to travel well on unpaved roads.

Fiat Tipo was often criticized for its bland interior, which offered an infotainment system with a screen smaller than most smartphones on the market. So, the Italians made a big improvement on the car's dashboard. A 7" TFT screen replaced the conventional, analog dials, and on the center stack, Fiat installed a 10.25" touch-screen display.

Under the hood, Fiat installed new engines that complied with the Euro 6d regulations, which were due to become mandatory from January 2021. The new, 1.0-liter gasoline engine was a three-pot unit that offered higher torque at lower revs than its 1.4-liter naturally aspirated unit, which it replaced. Fiat installed a revised version of its already known 1.6-liter unit for the diesel versions but upgraded to 130 hp for the top version. 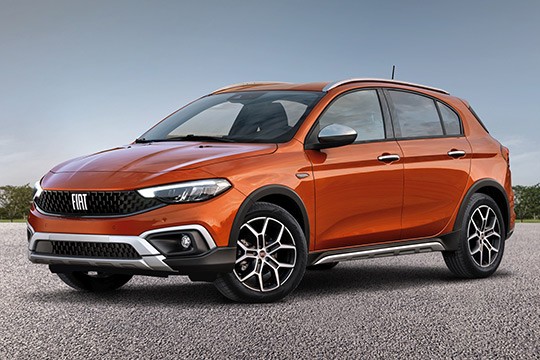