Fiat replaced the Bravo/Brava lineup in 2001 with a less mesmerizing nameplate: Stilo.

The carmaker produced it in three body versions, including a three-door hatchback.

After the bio-design era, Fiat was ready to return to some sharp lines and clean-cut edges, and the Stilo was exactly that. Regardless of its body shape, the Stilo looked good in any trim and in any company; however, the three-door version was the closest thing to the hot-hatch territory. But its sales were under the expectations.

On paper, the Stilo had all the necessary credentials to become a hot hatch. Its design was fresh with angular lines and a raked windshield. The three-doors version looked very sporty, even with steel wheels. Its rectangular openings in the front bumper and the slatted grille created a crisp image for the sporty-looking Italian hatchback. Depending on the trim level, it featured steel or light-alloy wheels.

Inside, the carmaker installed bucket seats at the front with enough bolstering to keep its occupants in place during hard cornering. The instrument cluster featured black dials with red needles for most of the engines available. A panoramic retractable glass-roof was available as well. Fiat installed a split-folding bench for the rear passengers, which came in handy to expand the trunk from 305 liters (10.8 cu-ft) to 1000 liters (35.3 cu-ft).

Under the hood, Fiat installed a wide choice of engines ranged between 80 hp and 170 hp and that including the five turbo-diesel versions, which promised a low fuel consumption. 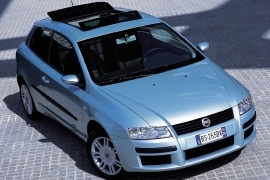