Two years before the first Fiat 500 Nuova rolled out of the assembly lane, Fiat introduced the 600 model, a car that redefined the family vehicle.

The 600 started its career in 1955 as a replacement for the Fiat Topolino, which was on the market since 1936. But the Italian carmaker didn't have too many resources after WWII, and that made it look to the small segment. It was the first Fiat with a rear-engine, and it was its first big success after the war. While it wasn't as successful as the 500, the 600 was the car to get for four adults on a long trip. It was more than a city car.

Fiat hired Dante Giacosa to design the 600. It was the same man that designed the Topolino. The Italian carmaker insisted on having a rear-engine vehicle, despite the designer being a big fan of front-wheel-drive cars. Giacosa created the vehicle big enough to fit four adults inside, but not bigger than that. The bubble-like roof was needed to offer decent headroom for the rear seat passengers. There was plenty of room in the front, anyway. The 600 featured flush to the fenders doors and rounded edges.

Inside, the 600 featured a long, metallic dash panel with the speedometer installed in an instrument cluster right in front of the driver. Since the car was very narrow, the designer installed handles to close the doors and vinyl pockets. Under the dashboard, he mounted a shelf.

Under the hood, Fiat installed a water-cooled four-cylinder engine that produced just 21 hp. It was paired to a 4-speed manual gearbox. 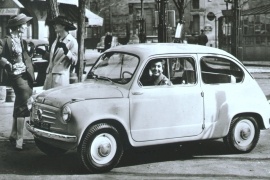