The little Fiat 500 was sold in over 1.5 million units before it received an ample refresh in 2015. With its charm and a nimble ride, the 500 received numerous updates inside and out.

The Fiat 500 might be called the Fiat brand savior. The charming little car was charming enough to bring back the Fiat brand in the U.S. And it was received as a fashion item more than a transportation device. Despite its small engines and lilliputian size, it fitted well between the big SUVs such as its relatives from RAM.

The 2016 Fiat 500 received a new design for the headlights and taillights. It also received LED daytime running lights, a feature that was not mandatory when the car was introduced to the market in 2007. The taillights were unique on the market, with the actual light encircling a body part. The reversing light and the rear fog-light were placed on the lower part of the bumper with a long chromed line between them.

Inside, the 500 featured a new infotainment unit of 5” that featured a touch-screen for the Lounge trim level. It was unusual for a car to feature a touch-screen smaller than a smartphone screen. An optional 7” display was available for the instrument cluster.

Under the hood, the 2016 Fiat 500 featured a 0.9-liter turbocharged engine with two cylinders and a 4-cylinder, naturally aspirated 1.2-liter unit. A 6-speed manual was fitted as standard while a 5-speed automatic was offered as an option. For the diesel fans, a 1.3-liter unit was available. 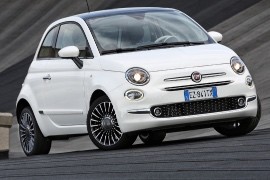