Pininfarina designed both the F430 and the F430 Spider in its state-of-the-art research center, but Ferrari chose to unveil the open-top version six months after the coupe.

In 2004, Ferrari was on top of the world with its winning streak in Formula 1. It was the car to beat, but "can't touch this" was more appropriate for its team and the mighty Michael Schumacher. The German driver won its seventh, and last, title. In 2005, Ferrari introduced the F430 with more F1 technology inside than any other supercar on the market.

When Pininfarina studio started to develop the car, it knew that it would have to be available in both closed and open forms. That is why it left room for the strengthened chassis. But the front of the car was similar, with the same big air-intakes in the lower bumper that took the air to the front disc-brakes to cool them. The F430 Spider was designed using state-of-the-art computer aerodynamics simulation programs, usually employed exclusively by the F1 team. The power-roof was retractable behind the seats but without obstructing the view to the engine bay.

The F430 Scuderia featured leather-wrapped bucket seats. The dashboard featured carbon-fiber trims on the center stack and around the outer vents. Like its coupe sibling, the Spider featured a steering wheel with the start button on it and the "Manettino" switch to select the driving programs.

Ferrari installed a 4.3-liter V8 in the middle of the car paired to a 6-speed manual. A 6-speed automatic was on the options list, together with paddle-shifters behind the steering wheel. 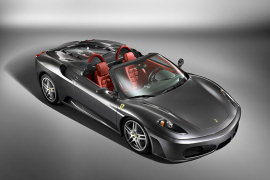