3 Moneybagg Yo Takes Out His Ferrari SF90 Stradale, Tests It on the Highway

Released at the Geneva Motor Show, the F12 Berlinetta was the replacement car for the Ferrari 599. Compared to its predecessor, the F12 was shorter, larger, faster and lighter by 70 kg, transforming it into the fastest Ferrari ever made by that time.

The car featured a 6.3-liter V12 engine developing 730 hp, more ponies than a Lamborghini Aventador. It was not only about the horsepower under the hood, as even the hood was designed in such a way to act like a front wing and redirect the airflow. The F12 weighed around 1,500 kg, which was about the same as a mid-size sedan.

The F12 had a spaceframe chassis, carefully studied aerodynamics, carbon-ceramic brakes with active cooling and a double-wishbone suspension.

Some might say that the interior was not up to their expectations, although the F12 had a luxurious cabin, it looked more like the Ferrari's cheaper cars.

The 2-seater was designed to be used on a daily bases by those wanting a powerful, yet comfortable car. Surprisingly, it had more than enough trunk space, up to 500L if the shelf between the trunk and the seats was removed.

As you already expected, the fuel consumption was high as probably no driver could get to the official average of 18.8 mpg. The F12 Berlinetta reached 100 kph in only 3.1 seconds. 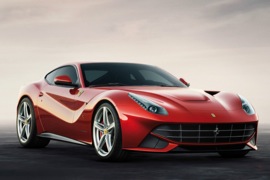