Ferrari introduced the Gran Turismo Omologata (GTO) version of its 599 supercar in 2010, and it charged about 30% more than the regular 599 GTB.

It is impossible to separate the racing pedigree from the street versions for the Ferrari brand. It seems that all the time, the Italian engineers made a supercar for the track and then adapted it for regular street-usage. For some particular models, that was the truth, while others were upgraded the other way around, such as the 599 GTO.

The car manufacturer learned from its mistakes in the 599 GTB and developed the GTO as a race-oriented car. It shaved about 100 kg (220 lbs) from its weight, added more power, and enhanced the car's grip and aerodynamic. In the end, it resulted in a faster vehicle, which was much better on a race-track but less friendly than a gran-turismo vehicle.

At the front, the GTO featured a mesh-grille instead of the slatted one on the GTB and air-vents on the hood. From its sides, the unique light-alloy wheels revealed the carbon-ceramic brakes system, which was fitted with carbon-ceramic brake-pads as well. Ferrari equipped the GTO with a new splitter that sported three vertical slats instead of two in the rear.

Inside, the luxurious GTB was stripped down to bare essentials on the GTO version. Its Seablet carbon-fiber seas with high bolstering provided great side support and were embroidered with the GTO logo on the integrated headrests.

Under the hood, the carmaker installed an upgraded engine that provided 50 hp more at a higher engine speed. Ferrari made all these modifications to make the GTO faster than the GTB while cornering and 0.3 seconds quicker on the 0-100 kph (0-62 mph) test. 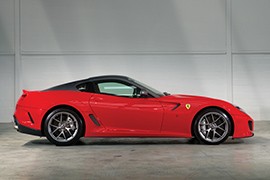