Based on the Ferrari 488 GTB, the 2018 Ferrari Pista offered 50 more horsepower than its sibling and it was built for track action, as its name suggested (Pista = track).

The true successor of the Ferrari 360 Challenge Stradale, 430 Scuderia, and 458 Speciale was designed for those who are regularly taking their cars to the race-track. After an intensive diet program, the 488 Pista lost 90 kgs (198 lbs) from the standard 488 GTB. The underbody aerodynamics was changed so the car would gain more downforce from the ground effect.

From the outside, the 488 Pista had few details that differentiated it from the standard 488. For instance, the wheels were made out of carbon fiber. That detail was important not only for the total weight of the car but also for reducing the unsprung masses, thus improving the handling. Also in the back, the bodywork element that connected the taillights was made out of carbon fiber. The same material was used for the rear diffuser.

Inside the car, everything was made out of Alcantara and carbon-fiber. While the first was used for the dashboard, upper door panels, and seat upholstery, most of the other items were made out of carbon-fiber.

The engine was the most powerful V8 engine ever made by the Ferrari. With its 720 hp mated to a 7-speed dual-clutch gearbox. It was rear-wheel-drive. 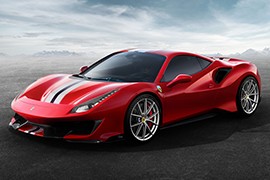