2 The Ferrari Purosangue Is Sold Out for Two Years, Orders Halted for the Time Being

5 BMW Superbike Doesn't Stand a Chance Against Ferrari's SF90, but the Opposite Is Also True

The 488 GTB was the step that placed the “Prancing Horse” company into the turbocharged era. It was the first V8 turbo Ferrari after the legendary F40.

While the F40 was turbocharged to step up the game, but its successor was naturally aspirated, the 488 GTB marked the beginning of the turbocharged era. From there on, Ferrari started to extend the forced-induction for all of its models. The 488 GTB was introduced at the 2015 Geneva Motor Show, 40 years after introducing the first mid-engine Ferrari, the 308 GTB.

The carmaker did the design in its own design center. At the front, a new air intake was divided in two by a splitter. The wide front spoiler featured a double profile to improve the thermal efficiency of the radiators placed on the sides. Its short front end was continued in a seamless curved line over the arched greenhouse from the side. The flowing line merged over the engine compartment in the back. Two big air-intakes were placed behind the doors, for better cooling and to feed the two, twin-scroll, turbochargers. The rear round taillights and the two exhausts were other specific signatures of the car. The rear diffuser was aerodynamically enhanced and hosted a third brake light, inspired by the F1 cars.

The engine was a newly developed 3.9-liter V8 fed by two turbochargers with two parallel ball-bearing. They were built with aviation-grade materials, with low-inertia turbine wheels. Thus, the turbo-lag was drastically reduced to a mere 0.8 seconds at 2000 rpm. The maximum torque was available only in the seventh gear of the sequential, dual-clutch, gearbox. The electronically controlled differential, E-Diff, offered more grip or allowed more slides, depending on the program set by the driver. 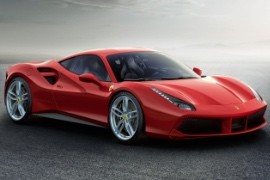