Ferrari upgraded the open-top 308 Spyder in 1982 and introduced new technologies to compensate for the power lost due to more recent emission regulations.

With a 255 hp developed from a 2.9-liter engine, the Ferrari 308 was a blast for its times, and many carmakers had to sweat just to keep up with them and, usually, they needed far larger engines than the high-revving V-8 offered by Ferrari. But things got even worse toward the late '70s when the new emission regulations forced the carmakers to lower the power for their cars in order to pass the tests. But the Italian carmaker was already developing a fuel-injection system which, together with the four-valves per cylinder system, allowed the carmaker to get more ponies.

The car sported a very similar exterior from the outside, but with some changes at the front. The carmaker installed a new set of fog lights and a spoiler to increase the downforce. From its sides, it was noticeable that it was not a true roadster or spyder. The GTSi Quatrovalvole sported a removable roof, but the B-pillars, side windows, and rear windscreen remained in place.

On the inside, the most significant improvement was the air-conditioning unit's addition, which Ferrari offered as an option. A redesigned, three-spoke steering wheel became standard for the car. Last but not least, the carmaker added a cloth center for the seats on the options list.

The most significant change by far was the engine, which received new cylinder heads. Its four-valves per cylinder system increased the power from 214 hp up to 240 hp. Even though it was 15 hp shy of the 1975 model and slower by 1.2 seconds to 100 kph (62 mph) from standing start, it was still faster by one second than the 1980 model. 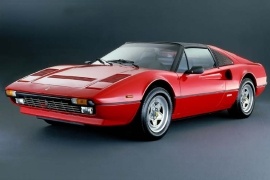