It featured the same shape but slightly different details.

Those who watched Magnum P.I. Series in the '80s must have been noticed the Ferrari 308 driven by Tom Selleck. He drove a 308 GTS in the movie, and the Italian carmaker's image went through the roof. All of a sudden, all the good guys wanted to drive a Ferrari.

The 308 GTSi was based on the same platform as the 308 GTBi. That different letter meant that the GTSi was a Spyder (open top) while the GTBi was a Berlinetta (closed coupe). That was the main difference between the two vehicles. Pininfarina designed both vehicles with the same cues and took good care in differentiating them. At the front, the pop-up headlights lowered the drag-coefficient. The carmaker installed a specific exhaust vent for the cars fitted with four valves per cylinder engine behind them. The 308 shape was one of the most recognizable from the Ferrari lineup.

Under the hood, the GTSi featured a 2.9-liter engine with four valves per cylinder. Due to the latest emission regulations, the carmaker had to introduce a fuel-injected system built by Bosch. The result was a cleaner engine, but with plenty of grunts to tear the streets. 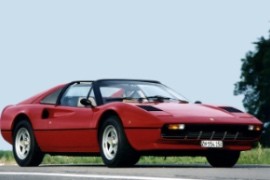