The targa version of the Ferrari 308 GTB received the GTS name and it was one of the cars that made the Italian brand notorious in the U.S. thanks to a movie-series.

You didn't have to grow a mustache and be a detective to drive a Ferrari GTS, but for those who dreamed about themselves to be some kind of heroes just because their bank account showed a six-figure number, it was the right car. Just two years after the GTB was unveiled at the Paris Motor Show, the car received a targa version.

The 308 GTS was one of the best-known Ferrari on the market, and its shape became legendary. The narrow front end with pop-up headlights, the raked windshield, and the side air-intakes made the car unique. Pininfarina designed its shape, and he did, as usual, a great job. From its sides, the thick B-pillars served as side panels and roll-over protection. The Italian designer kept the round taillights as a legacy for the prancing horse brand in the back.

Inside, the carmaker tried to offer a luxurious yet sporty interior. The sport-bucket seats sported leather upholstery and used the same material to cover the door panels. Its black plastic dashboard featured three round air-vents. A removable stereo was offered as an option. 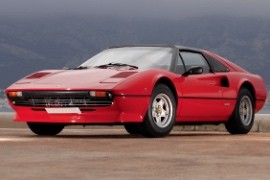