Ferrari finally introduced a four-valves per cylinder version for the 308 range in 1982 and gained back some power lost due to emission controls.

When Ferrari introduced the 308 in 1975, its 2.9-liter engine produced 255 hp, and it was a swift and appreciated car. But things didn't go that well for the Italian carmaker when the new rules regarding emissions were mandatory five years later, and the output had to decrease by 20 percent. The customers were stunned: their brand new models were slower than the previous ones. Ferrari had the solutions, but it took some time to implement them: fuel injection was the first step, and then it added four valves per cylinder. That was better. It was still slower than the 1975 model but faster than the 1980 version.

The car sported a very similar exterior from the outside, but with some changes at the front. The carmaker installed a new set of fog lights and a spoiler to increase the downforce. Since it was a mid-engined car, its front side was light and prone to understeer at higher speeds. Thanks to the new aerodynamic element, there was less air trapped under the vehicle, and thus it decreased the ground effect that lifted the nose.

On the inside, the biggest improvement was the air-conditioning unit's addition, which Ferrari offered as an option. A redesigned, three-spoke steering wheel became standard for the car. Last but not least, the carmaker added a cloth center for the seats on the options list.

The most significant change by far was the engine, which received new cylinder heads. Its four-valves per cylinder system increased the power from 214 hp up to 240 hp. Even though it was 15 hp shy of the 1975 model and slower by 1.2 seconds to 100 kph (62 mph) from standing start, it was still faster by one second than the 1980 model. 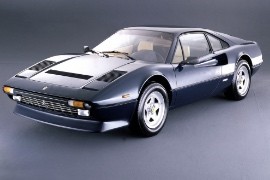