In the '80s, Ferrari understood the importance of building an image on the market, and the 308 was the weapon of choice.

Ferrari didn't build the 308 as a race-car with street clothes. Even though the carmaker homologated the vehicle to start in rallies and races, its main job was to keep the Ferrari name on the streets. It was designed as a Grand Turismo Berlinetta and named accordingly. That means it was engineered for long, relaxed drives in a vehicle that could carry some luggage.

Pininfarina designed the car as a three-box coupe and then shaped it as much as it could to make it more aerodynamic. At the front, the pop-up headlights lowered the drag-coefficient. The carmaker installed a specific exhaust vent for the cars fitted with four valves per cylinder engine behind them. The 308 shape was one of the most recognizable shapes from the Ferrari lineup. Its side air-intake for the engine and sloped rear panels were unique on the market.

Inside, the GTBi featured a luxurious cabin with leather everywhere. On the center console, the H-pattern metallic grille for the gear-stick ensured stiff and precise gear changes. The sport bucket seats with high bolstering provided both comfort and stability while cornering.

Under the hood, the GTBi featured a 2.9-liter engine with four valves per cylinder. Due to the latest emission regulations, the carmaker had to introduce a fuel-injected system built by Bosch. The result was a cleaner engine, but with plenty of grunts to tear the streets. 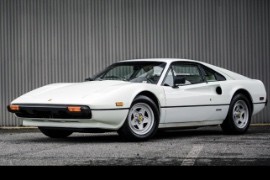