Following the successful first generation of the Talon, the American carmaker introduced a sequel for it, the 1995 Eagle Talon.

The alliance between Chrysler and Mitsubishi led to a second-generation Mitsubishi Eclipse production, also sold as an Eagle Talon. Unusually, the American customers preferred the Eagle version of the original Eclipse, which saved the Eagle brand for a few years. On the outside, the new bodywork followed the bio-design language. Its rounded shapes and semi-elliptic headlights dominated the front fascia. As with its predecessor, the car featured a grille only on the lower side of the bumper. A shy sculptured door panel visually enhanced the side of the car. Its arched and short greenhouse started with a very raked windshield and a short roof. Its rear windscreen featured a wing at the bottom for specific versions. The sporty coupe featured a very wide taillights assembly with Talon's lettering was clearly shown on the orange background in the rear.

Inside, the sport bucket-seats at the front provided good grip for their occupants, separated by the tall center console. The driver was surrounded by the instrument cluster and the center stack, while in the instrument panel, the carmaker installed big dials. For the turbocharged version, the carmaker installed even a boost gauge. Mitsubishi built the Eclipse/Talon with a 50/50 split-folding seatback for the rear passengers, good to expand the otherwise minimalist trunk.

Under the hood, the Talon offered a choice of two engines. The base version featured Chrysler's 2.0-liter inline-four carried over from the Dodge Neon, while the top version featured the well-known
4G63 engine, a turbocharged four-pot unit that provided more than enough power. The less-powered Talons sent their torque to the front wheels only, while the top-version was all-wheel-drive. 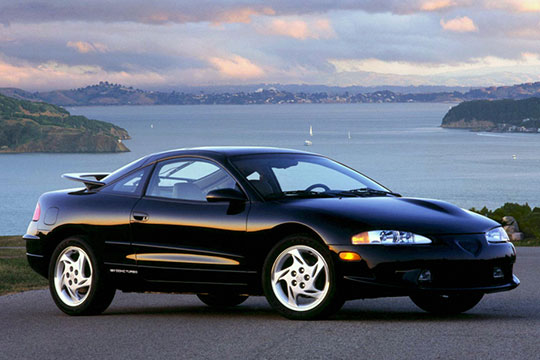