In a desperate move, the bleeding brand Eagle tried to get traction on the minivan market and introduced the Summit Wagon, a rebadged Mitsubishi Expo LRV.

By the 1990s, the Eagle Talon coupe was the only big seller in the Eagle lineup, and the once-independent brand tried hard to get another foot on the ground and balance itself. The Summit Wagon was a smart move. It was a minivan based on a compact-segment car platform. Its only trouble was that Mitsubishi tried to sell the same car on the same market as well. To make things even worse for Eagle, Chrysler decided to place the Plymouth badge on the same vehicle. Unlike the lemon-cars built together with Renault in France, Mitsubishi built the Summit in Japan.

It might have looked like a station wagon with a higher roof, but it was still a minivan. Its steep hood and tall greenhouse gave the Summit a spacious interior, while its length was short enough to fit inside any parking spot. The Summit featured a rear sliding door that made the ingress and egress very convenient on the passenger's side.

Inside, the Premier was big enough to carry up to five full-grown adults. The front-seat passengers were not very happy with the legroom, and that included the driver. At least, the steering-column was height-adjustable. Eagle offered a choice for a tachometer in the instrument cluster, a function that was not available on the regular Mitsubishi Expo LRV.

Under the hood, there were two engine options: a 1.8-liter 16-valves and a 2.4-liter 8-valves. Both of them were paired to a five-speed manual, while a four-speed automatic was on the options list. An AWD version was available as an option. 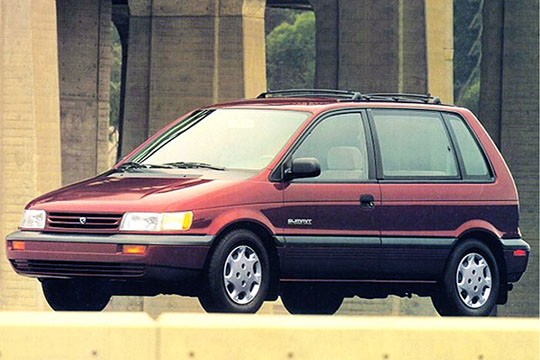