The Italian carmaker DR introduced the DR5 SUV at the 2006 Bologna Motor Show, and sales started in the following year.

When the Chinese carmaker Cherry introduced the Tiggo SUV on the market, the car's look resembled the Toyota Rav4 and Honda CR-V as well. But it was too far from the carmaker's area of interest, Europe. Then, the Italian company DR cut a deal with the Chinese company. The cars were sent to Italy as complete knocked-down kits (CKD). They were assembled there under a different badge: DR. Thus, the DR5 came on the Italian shores and, from there, on the European roads.

Its headlights were very similar to those installed on the 2004 Honda CR-V. A reversed trapezoidal grille was cut into the front, wrapped-around bumper. The car sported a pair of rectangular fog lights installed in a set of angled scoops on the lower outer sides. From its sides, the DR5 resembled the Toyota Rav4 with its arched window line towards the D-pillar. At the back, a side-hinged door opened the way to a small trunk.

Inside, the DR installed a dashboard produced by its Chinese partner but with a mix of design languages that couldn't match. A silver line crossed the front side of the panel and raised above the center stack. Surprisingly though, there was enough room in the back for three adults, but that came with the compromise of a smaller trunk. The luggage area barely matched some of the European compact hatchbacks from those times.

Under the hood, DR initially tried to offer the vehicle with Fiat-sourced turbo-diesel engines, with an option for a Cherry-sourced inline-four gasoline powerplant. In the end, Fiat bailed out and didn't offer its engines to DR. 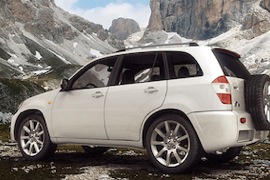