A strange marriage between a Chinese car-maker and an Italian company led to the birth in 2006 of a new brand named DR.

Sometimes brands are born without any passion for cars, respect for other car-makers, and just enough respect for the customers to keep them coming into showrooms. The DR was founded in 2006 and increased its production capacity to up to 100 vehicles per day.

The idea behind the project was to built cars with Italian design and foreign technology. One of the results was the 2013 DR City Cross, which is unlikely to have an Italian designer in the team. The car resembled the center part of a Daewoo Matiz (Chevrolet Spark) with a different font and rear end extended. The headlights resembled the Opel/Vauxhall Astra units, the grille was misplaced and the hood looked like someone drew it in the last moment. The car was short, tall, and narrow.

Inside, the car featured a center-mounted instrument cluster that wasn't tilted toward the driver, so it was cheaper to transform it from left to right-hand drive. The HVAC control unit from the center stack featured a more interesting design, with a turning knob for the temperature, and the speed and air distribution placed on the outside, with edge-mounted manual controls. The high seats allowed a better interior room for the occupants. The rear bench featured a folding seatback, but as a whole not in a split-way.

The DR CityCross was offered with a 1.3-liter gasoline engine. It was available as a bi-fuel, with LPG. The only available transmission was a 5-speed gearbox, which sent the power to the front wheels. 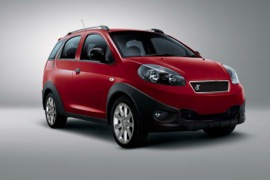