In its quest to find more powerful engines for the Lotus Seven licensed roadster, Donkervoort made a call to Ford of Europe, and the result was the 1993 D8.

When Collin Chapman built the first Lotus Seven, he certainly didn't think that a company from Netherland will start producing them under license more than three decades later and kept doing that for more than two decades. Well, Joop Donkervoort did that when he bought the rights to build the light British roadster. He started with Ford engines since they came in a complete package with the gearbox and the rear axle. Caterham did the same in the U.K. Moreover, a new Cosworth engine was built for the Ford Sierra and perfectly matched the car's chassis.

The Dutch company redesigned the bodywork and added a different, longer nose. It still featured the same double-wishbone front suspension with small fenders over the wide wheels and round headlights stuffed between the engine compartment and the wheels. Its rounded shapes and multiple vents on the hood and the sides made the car look meaner. Like its British ancestor, the D8 featured a short cabin and a tiny overhang behind the rear wheels.

With its cramped cabin, the D8 promised nothing more than a harsh ride with the occupants touching elbows all the time, despite the tall center console. The carmaker installed a flat dash panel with the speedometer and the tachometer in front of the driver and another five gauges in the lined-up in the middle. Donkervoort installed two slim bucket seats with high bolstering.

The Dutch carmaker installed Ford's new Zetec/Zetec-E engines, which produced more than enough power to propel the car faster than most sports cars. Later on, it switched to the Zetec-R range and turbocharged Cosworth and Audi engines. 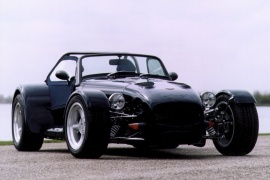