Dodge introduced the third generation of the Viper in 2002 in the roadster version and, in the following year, it came with the coupe version.

By 2003, the Viper was already a phenomenon in the supersport arena. Its nameplate was known on the racetracks around the world, placed next to the Ferrari, Lamborghini, or Aston Martin. It wasn't only the U.S. sportscar anymore. But it was still the same bad guy you like to hang-out with, but you don't want to see with.

Ralph Gilles designed the coupe based on the roadster created by Osamu Shikado in 1999. While it was an important step ahead of the original design, it remained the same aggressive-looking coupe with a long hood and a bubbled roof. Its headlights received a triangular shape that resembled the eyes of a snake. In the back, the lip-spoiler on the lift-gate produced more emotions than downforce.

Inside, the spartan cabin left room only for two people separated by a wide center console. The gear-stick was thick and strong like the whole car depended on it. Since it was the best-known American supercar, the designer decided to create a memorable experience for the driver and tilted the center stack toward the driver's seat. Unlike its predecessor, the 2003 Viper featured a cup-holder next to the parking brake, near the power-windows buttons.

The 2003 Viper came with a better braking system and featured ABS. Under the hood, the carmaker installed an 8.3-liter V-10 engine paired to a standard six-speed manual gearbox. It sent all the power to the rear wheels via a limited-slip differential. 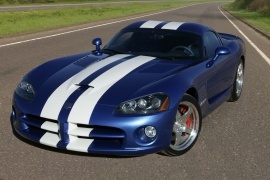