In 1995 Dodge introduced the second generation of the Viper, and it offered it into a coupe shape that added more practicality without spoiling the performance.

The Viper was the car that brought back the Dodge brand on the car magazines' front pages. Thanks to it, Chrysler ended the Corvette domination as the American fastest sports car and started a new car culture. It was a true daily driver supercar in the coupe form, just with a truck engine at the front.

Its long, curved hood featured an air scoop in the middle and side vents. The design team drew the lines with a purpose and in a flamboyant style. The fenders were big and featured vents behind the wheels. The duck-tail in the rear was both elegant and useful. Even the two bubbles on the roof, named Guerney-bubbles after the tall racing driver, served to increase the headroom, mostly when racing helmets were used.

Inside, the Viper GTS Coupe featured air-conditioning and roll-down power windows. It was not possible on the first generation, which featured zip-folding side windows and a canvas top not bigger than a handkerchief. The sport-bucket seats were meant to keep its occupants in place during hard cornering. In the back, only the sloped window could have been open to access the trunk, which was large enough.

They said that the car was built around the engine. It might be true since the 450 hp V10 engine was huge. It was cast by Lamborghini, which at that time belonged to Chrysler. There was only one transmission available, a 6-speed manual. 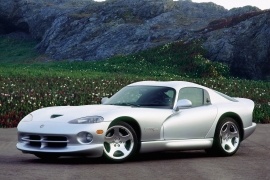