Dodge won the 1997 FIA GT2 Championship and did-it again in 1998, so the carmaker decided that it could build a special street-version of the winning car: the 1999 Viper GT2.

Whether Dodge dropped a V-10 engine under the hood of a sports car or built an oversized go-kart around that powerplant, the result was magnificent. The result was a rocket-car for its times, and the Viper remained in the Motorsport History as the David that defeated Porsche Goliath on its game. Worth mentioning that in 1998, Viper Team Oreca won nine out of ten races of the FIA GT2 Championship. Dodge took the 1-2 class win at the 1998 24h LeMans race to seal its racing capability. Doge celebrated that incredible performance by building 100 road-cars that resembled the racing vehicles.

First of all, they were all white with two blue stripes from the nose to the rear wing. Then, it added 18" BBS light-alloy wheels, cast especially for this GT2 and the ACR club-racing editions Vipers. There was a special air-splitter at the front, and on the sides, the carmaker installed ground-effect rocker panels. In the back, Dodge mounted a carbon-fiber wing that stood there just for the looks since it didn't offer downforce or lift.

While Dodge made the exterior resemble the race-car version, the interior looked more civilized, at the mid-way between the race- and the street-version. A five-point harness was fitted as standard. The GT2 version featured leather-wrapped sports-bucket seats with black bolstering and blue mid-sections. Worth mentioning the white dials in the instrument cluster and, of course, the small metallic badge on the center console.

Under the hood, Dodge squeezed more power and torque from the massive 8.0-liter engine. Thus, it resulted in the quickest Viper from its times. 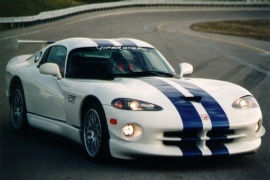 2 This 1,080-HP Dodge Hellcat Is "Catching Criminals Wherever It Roams in Texas"

3 1975 Dodge B200 Sportsman Maxiwagon Camper Has All the Good Vibes, Still Great for Camping