The last generation of the Magnum was a rather short-lived model and was produced for only 4 years.

The concept that previewed the car was unveiled at the Los Angeles show. The first ever Dodge Magnum was produced in 1978, and the nameplate made a return in the mid 2000s.

The model released in 2004 was offered with three V8 engine options, developing up to 430 hp and mated with a 5-speed automatic transmission. The car had a wide stance and bigger wheels, being Dodge’s first station wagon and looking like a combination between a muscle car and a family car, while Dodge called it a sport tourer.

The Magnum was available in three level trims: SE, SXT and RT. The SXT and RT were available with AWD. Design wise, the Magnum was very similar to Dodge’s Charger, with a modified hood, fender and headlights, while still keeping the signature Dodge grille. The cargo area was very spacious for a station wagon.

The SRT8 version of the Magnum had a 20-inch alloy wheels, was equipped with red Brembo brake calipers and had a honeycomb grille. Leather upholstery was optional for the SXT trim level and was a standard for the RT and SRT8. The car was also equipped with a cargo management system.

In 2008, the Magnum was revised and Dodge tried to bring it closer to the Dodge Charger’s design, while distancing it from the Chrylser 300c’s one. A new paint color was available for the first time, Dodge naming it “Torred”. 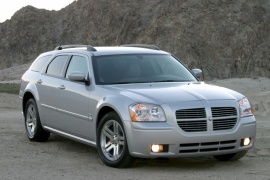