The Dodge Dart released in 2012 was based on a concept car Chrysler released in in 2006 under the nameplate of Dodge Hornet.

Even though the Hornet was supposed to be released in 2010, Chrysler could no longer invest due to the 2009 financial crisis. The solution for Chrysler was to merge to Fiat, thus the new model was built on a Fiat platform and was renamed Dodge Dart.

The Dodge Dart made its appearance at the North American International Auto Show in Michigan. The Dart was sold as the Fiat Viaggio on the non-US markets.
The car was available with three trim levels: SE, SXT and Limited.

The base level offered standard equipment such as a 160 hp 2.0-liter engine mated with a 6-speed manual transmission, a 4-speaker audio system, power windows, 15-inch steel wheels with plastic covers. An additional package was available for the SE trim level which included air conditioning, a Bluetooth connection for audio streaming and an automatic 6-speed transmission. 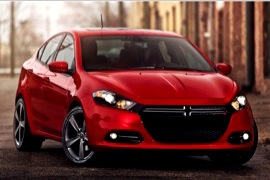