Dodge said the last farewell to the muscle-car era with the third generation of the Charger in 1971, before the CAFE rules and the insurance policies killed the movement.

With a name already respected on the streets, the third generation of the Charger tried to make a comeback with better marks in the handling department and better quarter-mile times. But Chrysler tried more and enriched the equipment list adding headlights washers, stabilizer bars both front and rear, and a more refined interior.

From the outside, the Charger featured a shorter wheelbase and overall length. Also, the carmaker made the coupe wider and with increased tracks both front and rear. The grille lost the nameplate from the left headlight cover, and the front doors lost their sculptured fake vents from the front area. A major difference was on the B-pillar, which was thicker. Thus, the car lost its fake-cabriolet shape since the rear side windows were smaller.

Inside, the Charger still could accommodate up to five people, with better headroom for the rear seat passengers, but the carmaker profiled the bench to be comfortable just for two adults. At the front, the instrument cluster raised from the dashboard line, covering the dials and the gauges. Between the front seats, the carmaker mounted a floor shifter for both versions, automatic or manual.

Under the hood, Chrysler installed a wide choice of engines that ranged from a small, inline-six unit that provided just 110 hp and went all the way to a 7.0-liter V-8 which put down 425 hp for the most powerful version. 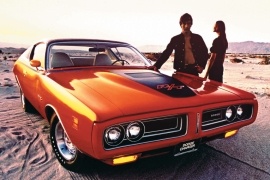