Chrysler was losing ground in front of Ford on the NASCAR racetrack and ordered its engineers to do something about it, and the answer was the Charger Daytona.

While the Charger was a respected name in the muscle-car arena, its name was unknown in the victory circle. The engineers returned to their drawing boards and came up with the Daytona version. It was unique on the market, and it led to NASCAR regulation changes.

The Daytona version was easy to spot due to its 2' (610 mm) high rear wing on the trunk, which attracted more views than the steel cone from the front. Unlike the regular Charger, the Daytona version featured pop-up headlights. Chrysler's engineers came with an aerodynamic package solution to prevent the big brick from lifting from the ground at higher speeds. Chrysler tested the car in the Lockheed-Martin wind tunnel, and it showed a 20% improvement in its aerodynamic. It proved that at Talladega raceway were Buddy Baker reached 200.447 mph (322.58 kph). It was the first NASCAR race-car to exceed the 200 mph barrier.

Inside, all Charger Daytonas featured a wood panel as the dashboard, with two large dials in front of the driver and another four gauges on its right side. Its standard front bucket seats didn't feature a high bolstering for the street versions since they were changed anyway for track use.

Dodge installed a choice of two engines under the Daytona's hood: the standard 7.2-liter Magnum V-8 with an option for the 7.0-liter Hemi engine, which was much more powerful. Since the car was based on the Charger R/T version, it featured a heavy-duty suspension and brake system. 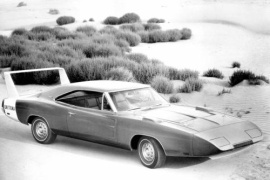 1 Video: Straight-Piping a V6-Powered Dodge Charger Is Not Exactly a Good Idea

4 The 2022 Dodge Challenger SRT Jailbreak Looks and Sounds Great at Night, Hear It in 3D