Daimler Chrysler revived the old glorious Charger name from the nameplates shelf and brought it back to daylight in 2005 when Dodge unleashed the four-door sedan.

While the previous genuine Charger was a true muscle-car, the 2005 model was a four-door sedan based on the same platform as the Chrysler 300 Sedan and the Dodge Magnum station wagon. Dodge built it for those who were teenagers in the late '60s and early '70s, and now they needed a family sedan.

Just by looking at the Charger, it was somehow surprising that it featured four doors. Its coupe-like stance with narrow and pinched windows line gave the impression of a four-door coupe, in the American way. Its double, round headlights and the cross-hair grille left no doubts about the car's brand even without a badge on it. The wrapped-around plastic bumper sported two fog lights at the bottom and a wide lower grille in the apron. From its sides, the rear fenders' raised shoulders started from the back of the rear doors while the sloped rear windscreen mimicked a coupe-like silhouette.

Inside, depending on the engine option, the Charger featured bucket seats or high-bolstered seats. Its instrument cluster raised from the dash panel under a sweeping line and sported four dials and two LCDs at the bottom of the speedometer and tachometer. On the center stack, Dodge installed as an option an infotainment unit with navigation, CD, and Bluetooth connectivity. In the back, due to the high transmission tunnel, the bench was good only for two occupants but not too tall. The greenhouse was not that tall.

Dodge installed a few engine choices under the hood, ranging from a 2.7-liter up to the mean SRT8 version powered by a 5.70-liter V-8 engine. Power went to the rear wheels only. 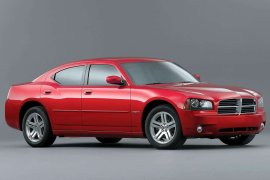