The Dodge Charger was a model introduced by Dodge in 1965.

The 1966 to 1974 Chargers were sporty models based on the Chrysler B platform that could be ordered with high-performance options. The car still resembled a Coronet or the AMC Rambler Marlin concept and was rather a luxury fastback model than a top-tier muscle car during the first generation. The interior came with semi-bucket back seats that could be folded down to increase luggage space along with a wood-grain steering wheel, front bucket seats, a full-length console, and an interesting dashboard for the period which was using electroluminescence to light up at night. 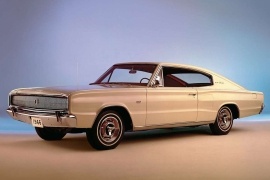