Daihatsu introduced the second generation of the Terios in 2006, and, just like its predecessor, it came with an unusual design for an off-roader.

The Japanese automaker was under Toyota's umbrella, and they noticed a rise in demand for crossovers and SUVs. While other manufacturers had to develop one from scratch, Daihatsu didn't have to since it already had a proper platform and the technological expertise to build one.

But if the technical department was ready to create a new small-sized SUV, the design department wasn't on the same page. Thus, the Terios looked very rounded on all sides. At the front, the swept-back headlights didn't look like they belonged to an off-road vehicle. Yet, the flared wheel fenders gave the impression of a true 4x4 vehicle. The door panels on the sides looked very tall compared to the car's height. Moreover, the windows were not that big. Still, the designers had a good idea to install a small window behind the rear doors and blacken the D-pillars to create a wrap-around image at the back of the vehicle.

Inside, the Terios was actually roomy enough for four adults. Even though everything looked like it was penned for a small-sized city vehicle, they were installed in an SUV. The binocular-style instrument cluster hosted the speedometer in the middle, the tachometer on the left, and the fuel gauge on the right. Terios' high-mounted front seats allowed the automaker to create more room for the rear-seated passengers. Finally, the small trunk in the back was large enough to carry a couple of backpacks for children.

Under the hood, Daihatsu placed a 1.5-liter gasoline engine that was good enough to move this small vehicle in town. Moreover, it installed a 4x4 system, which was useful in the winter. 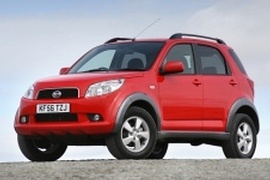