Daihatsu introduced the Applause in 1989 to compete in the small-segment market with a vehicle that was half a three-box sedan and half a hatchback.

Being the oldest internal combustion engine manufacturer in Japan didn't make it an excellent carmaker. Still, it had some decent results with a few models, such as the Charade or the Rocky off-road vehicle. But it was not enough, and the company's management decided to come with something different, and that was the Applause.

From the outside, the Applause looked like a regular, small-size sedan, but it wasn't. At the front, it featured two horizontal headlights that didn't go around the corner, like most of the other cars from that era. Its turn signals were placed on the wrapped-around plastic bumper. Depending on the trim level, it sported an apron on the lower side. From its sides, the flush-mounted door handles looked good and built to improve the car's aerodynamic. In the rear, the Applause was an original design. While it looked like a three-box sedan, the trunk lid opened together with the rear window. It was like a hatchback, but with an added body element.

Inside, the carmaker followed the straight-line design concept, with a flat and low-mounted dashboard. Its center stack featured the radio and the climate control vents, the latter being on the lowest part. The instrument panel provided information about the revs and speed, along with those for the coolant temperature and fuel level. A few additional warning lights completed the necessary information about the car. A unique car feature was for the rear seats, which were tilting rearward, but they couldn't fold flat.

Under the hood, Daihatsu offered the Applause a choice of two engines and three gearboxes: a five-speed manual, a six-speed manual, and a three-speed automatic. 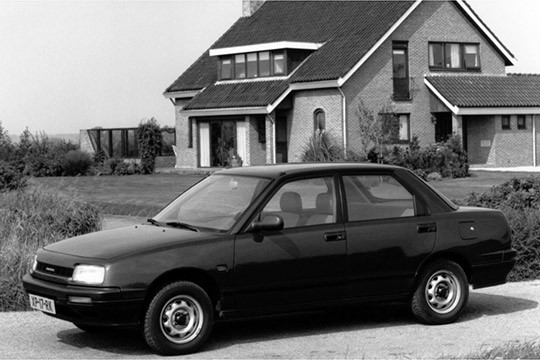