Daihatsu introduced the Altis' fourth generation in 2012, replacing its predecessor after only six years, keeping the pace with its better-known sibling, the Camry.

The badge-engineering recipe worked well for the Japanese carmaker Daihatsu and it managed to sell the Altis on the Japanese market. Maybe it wasn't the time, yet to let the Camry go and sell somewhere exclusively elsewhere around the world, but at least for the base versions it could replace its sibling in its home country.

On the outside, the Altis was upgraded with a new front fascia and sported the same chromed details as the Camry. Its lower bumper featured two side-mounted fog lights, which were tall and narrow. It clearly showed a sportier look than its predecessor. Its four-door sedan shape was designed with long and curved lines, while the rear windscreen showed an even further raked-forward appearance.

Inside, the car-maker continued its trend in modernizing the cabin. It updated the infotainment unit but kept that simplicity noticed on the 2006 Altis with a clean dashboard and center stack. The instrument cluster featured the same layout for the dials, with the speedometer and tachometer flanked by the gauges for fuel-level and coolant temperature. Like the generation it replaced, it offered a decent amount of room in the back.

Toyota dropped the 2.4-liter engine and replaced it with a 2.5-liter unit that featured the same inline-four architecture and installed it under the Altis' hood. The only transmission available was a CVT and it didn't offer the option for an all-wheel-drive system. 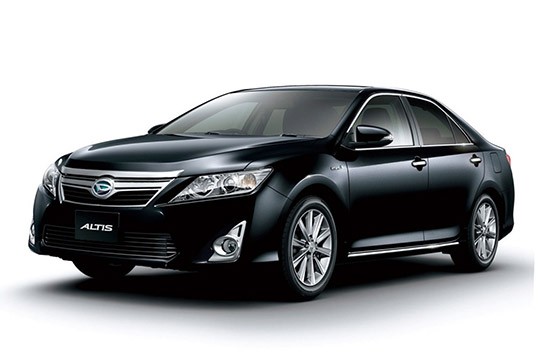